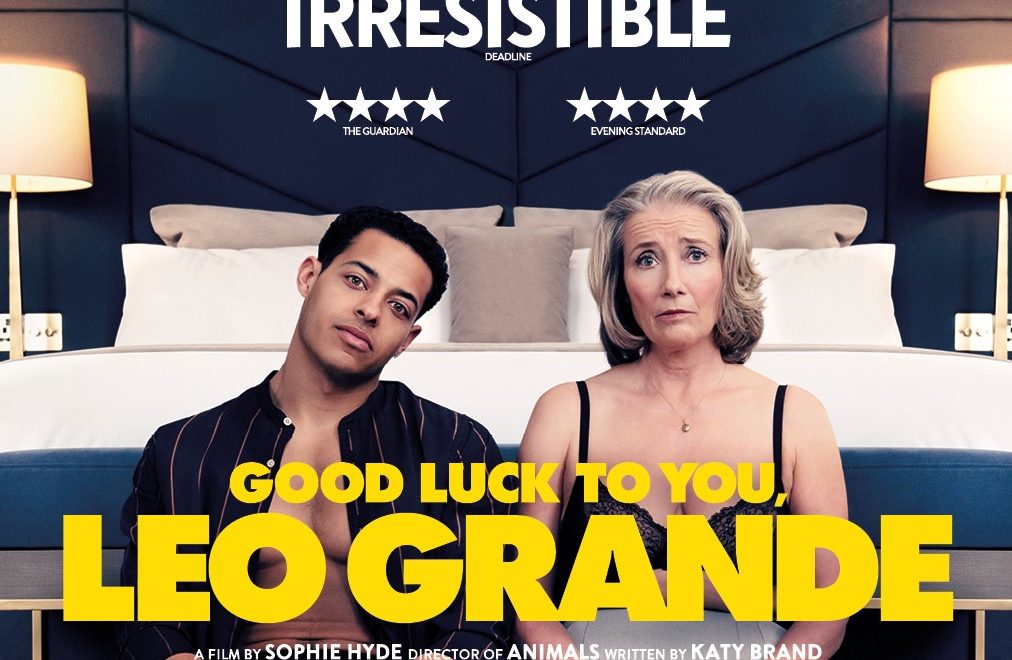 We caught up with the wonderful Norfolk based producer, Debbie Gray (Genesius Pictures) whose latest film Good Luck to You, Leo Grande is taking the world by storm. This high profile film was shot in Norwich and we at Norfolk Screen were very lucky to offer some early support to the production team around filming in the region.

For those who might not be familiar with the story the film stars Emma Thompson and Daryl McCormack, which focuses on retired widow Nancy Stokes who hires a good-looking young sex worker called Leo Grande, in the hope of enjoying a night of pleasure and self-discovery after an unfulfilling married life. This charming, insightful and sex positive film is playing at a number of UK cinemas and is available on Hulu in America.

How did you become attached to this project and what attracted you to produce it?

I first became attached to this project when Katy Brand, the comedian and writer of Good Luck to You, Leo Grande sent me the script during the first lockdown, May of 2020. I immediately responded positively to the story and characters because it felt so unique and story that hadn’t been told before.

You have an incredible cast in Emma Thompson and Daryl McCormack – what was it like bringing these actors on board and working with them?

Bringing the two of them on board was great! Emma Thompson attached to the project very early on so we had a lot of time developing the character of Nancy. Emma is amazing to work with, she is very collaborative and smart. Daryl McCormack came on board in the latter stages of development but his input into the character of Leo was huge and he really put his all into the character. The two of them had great chemistry and the experience of working with them so positive.

Good Luck to You, Leo Grande premiered at Sundance to rave reviews, and is now due for release in the UK – how does it feel for your film to be out there receiving such a buzz and what are you hoping the audience takes away from it?

Having such a buzz surrounding the film is very exciting and I’m so happy that the film is finally out for everyone to see. I hope when people go to see the film that it makes them laugh and think about pleasure, consent and sex in a more open-minded way and also that it starts important conversations surrounding these subjects.

What were the challenges and opportunities for shooting in Norwich?

The main challenge that we had whilst filming in Norwich was finding local crew. As a producer based in the region, I had hoped to use a lot of local crew and facilities but alas there are not as many people in the industry here as I had first hoped! Covid was also a challenge for us but because we shot in Norwich we were able to bubble very effectively. The greatest opportunity for shooting in Norwich was that we were able to bring a high profile film to the area and demonstrate to the rest of the industry that Norwich is a great place to make films.

We understand you are from Norfolk – did you get to see a different side of Norwich while filming versus just visiting here?

I know Norwich very well but it was great to spend a lot of time in the city again and see all of the beauty it has to offer.

This film features two people mainly in one location – did the director and cast find it challenging to film like this?

Because this is a very intimate and intense piece of film making, I think it actually helped our director Sophie Hyde as well as Emma & Daryl enormously having just one location as it allowed them to really be intense with the work, but in a comfortable and familiar setting which allowed them to really put there all into the characters of Nancy & Leo.

We are aware there are some Norwich locations used, such as the ice cream parlour (Cafe Gelato), but were there any locations you would have liked to have used in Norwich but didn’t get a chance to?

As this film was based mainly in just the one room there were only a few scenes in which the environment was different. For these scenes we found locations in Norwich that we really wanted to use in the film, such as Café Gelato which we were very lucky to have access to. The ice cream is awesome.

What was your experience working with Norfolk Screen?

Working with Norfolk Screen was lovely they were very supportive and helpful throughout the whole process.

As a producer, do you have any favourite Norfolk locations which you would like to
see used more in film?

I would love to see the North Norfolk coast in more films as it is so beautiful and has some of the most incredible beaches is the country.

Norfolk is an incredible county – would you recommend filming in the region and
why?

I would recommend filming in the region as there is such a diverse range of locations and the people are so friendly and accommodating.